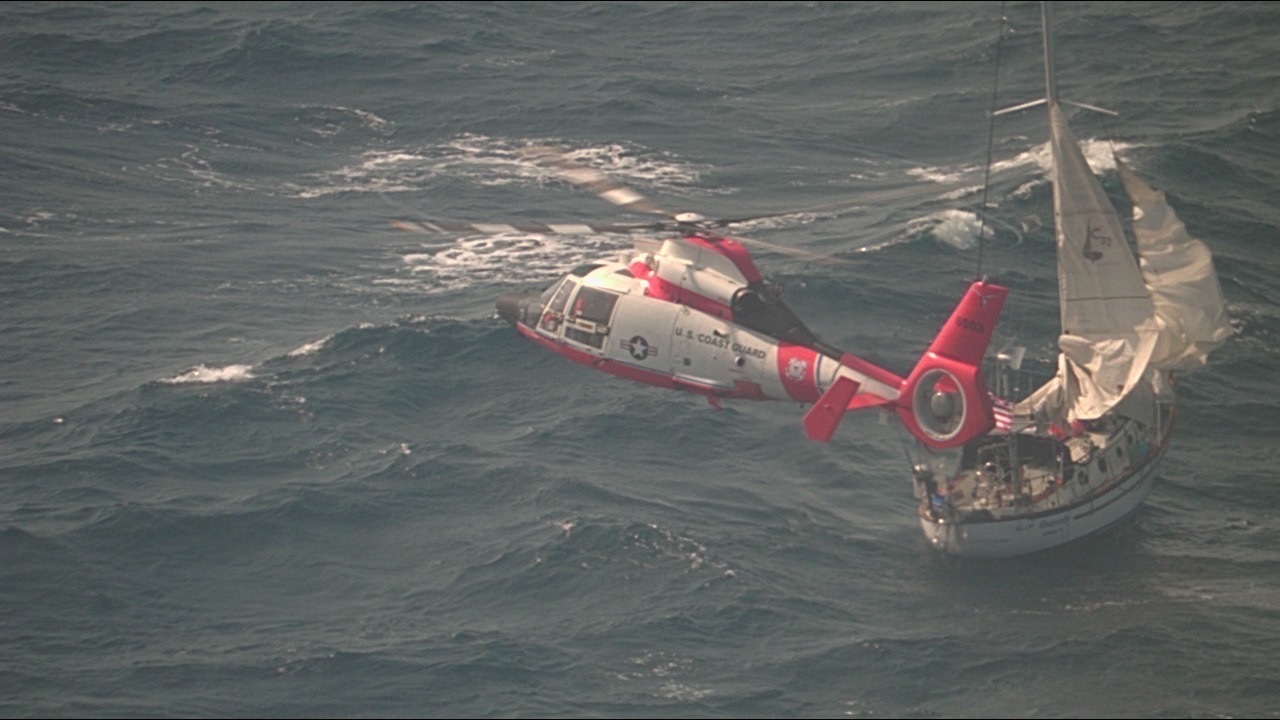 A buddy and I got the 37-foot sailing vessel Rhapsody in shape and set sail from Houston for Isla Mujeres, Mexico, Sunday after Christmas.

Halfway there, at 2AM on Thursday, January 2nd, a heavy duty Li-ion battery pack exploded 4 times, during about 10 minutes, setting the boat interior afire repeatedly.

The cordless drill was nestled amidship in a dry locker but apparently suffered mechanical damage due to wave-on-hull impacts in 2m seas and 20kt winds – a normal sea-state in blue water. Ignition was 30 min AFTER heaving-to for sleep.

We broadcast “Mayday” after the 2nd explosion, set off the EPIRB after the 3rd explosion, and expended both fire extinguishers. The US Coast Guard diverted an LPG tanker and launched 2 fixed wing planes to ascertain the situation. Seas were too rough to safely transfer onto the LPG tanker’s tender and dawn shown no better so USCG launched a helicopter to rescue us. They were required to re-fueled en-route.

We jumped into the sea and swam to a cage with the assistance of a diver before being winched aboard. Rhapsody was abandoned 288 nm SE of Corpus Christi, and was last seen afloat pointed toward Mexico, but now sleeps with the fishes.

The kind folks on Anadarko’s production platform loaned us dry clothes and fed us a hot meal while the chopper re-fueled again. Our wives retrieved us at Ellington Field and have us on substantially shorter leashes.

Treat Li-ion batteries with kid gloves. Crew sustained only minor injuries. I could no longer reasonably guarantee the safety of the crew far offshore with depleted fire extinguishers, expended EPIRB, charred interior, and no PPE to decontaminate and to secure food and water supplies. No tow in range. All gear was lost.

*Now planning to sail Nauticat 43 Tango May-Oct 2023 from Seattle to Boston across the Canadian Arctic through the Northwest Passage. ACR EPIRB on boat. ACR PLB on my life vest! I don’t sail without ACR!*

Never turn your back on a lithium ion battery.

Review and update your policy for Scheduled Personal Property in excess of the minimum. My policy covered only $1k electronics. Aboard were several computers and software, underwater camera, underwater metal detector, etc.  The ship was family and priceless.

I’d like you to note the heroic efforts of the USCG helicopter crew. We were so far offshore that they had to refuel twice before we got to Ellington Field. And thanks to the hospitable crew on  Anadarko’s production platform for loaning us dry clothes. We live in strange times but there are still people willing to help strangers. The tanker Sahara Gas deserves a shout out, too. They quickly diverted to render assistance but seas were too rough for a safe personnel transfer so they stood by to rescue us in case things went even further sideways. Last, but certainly not least, thank you American taxpayer for funding the USCG.

EPIRB Activated as Sailboat Sinks in the Atlantic

ran down grabbed my emergency bail bag and the ACR EPIRB from the wall and threw them into the Inflatable dinghy.  I lowered the dinghy, jumped in and untied from my sailboat and pushed away.  After the boat's last mast antenna submerged I gathered my thoughts of what just happened.

With the cost of boats as expensive as they are, the cost of an EPIRB is merely pennies compared to that. The next time you decide to go out fishing or boating offshore keep that in mind. It's not only your life that's at stake, it's anyone you decide to take with you.