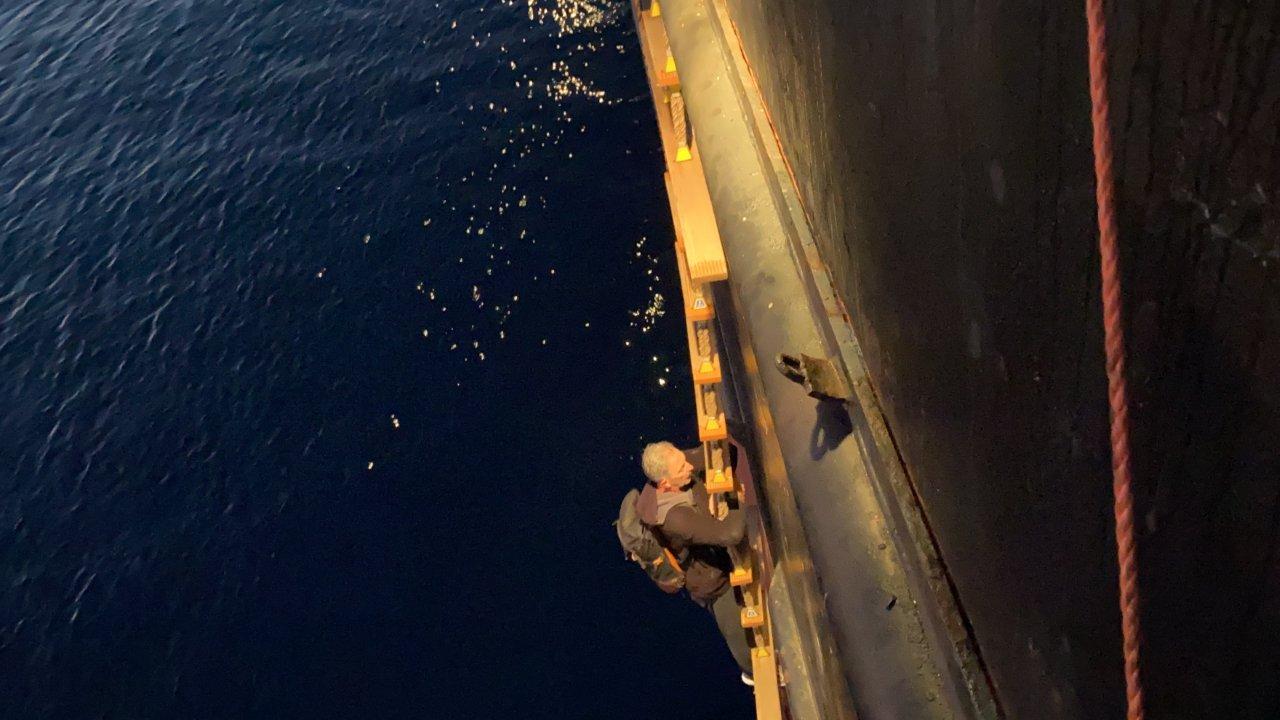 At 07.00 I set out from Amoopi Bay on the Island of Karpathos, which lies between Crete and Rhodes, with the intention of sailing to Paphos, Cyprus, approx. 260 miles East. The forecast was excellent with force 3 to 5 on the beam most of the way.

All through the day I was sailing past various bits of what could only be described as commercial rubbish. There were a 3 or 4 large plastic bin liners, much bigger than a domestic wheelie bin.  There were also around 6 large bales of straw/hey, bound in plastic wrapping, two tires and the cushions from a three piece suite, all 5 of them.

At approx. 00.40 I hit an unknown object, which seemed to bounce along the starboard side, hitting approx. 3 times. The log stopped working. The log impeller is under the chart table in a cupboard in which I keep essential tools and spare. Upon inspection, there didn’t appear to be any damage. There was a little water, but there always is some in the bilges because the stern anchor rope drains into the bilges and the “shower” compartment drains into the heads bilges and the pump never quite gets it all.

Next I moved forward to the space under the forward berth. When I lifted the bed up, I was alarmed to see the compartment was full of water. In order to gain proper access, I removed the cushions and plywood base. Under the forward bunk is divided into five sections. Moving forward from the bulkhead between the bedroom and saloon, these are two smaller sections either side of the bed infill, wet weather gear on one side, bedding on the other. The next section is the full width of the hull and is divided fore and aft. This is for tools and spares. The forward section is dedicated to engine spares.

I began to remove the plastic baskets (for tools and spares) and other tool boxes. I was working with a head torch only, the only cabin light is above and behind me, my body blocked out its light. Afraid of treading inside the compartments for fear of getting my foot stuck, I climbed over them to reach the last of the items, then systematically reached into the water to feel for any damage. This was both painful, on knees and shins and awkward. The light from my head torch simply reflected back into my face off the disturbed water surface. I felt increasingly uneasy in the confined space. I wasn’t able to locate the hull breach. By the time I withdrew into the saloon, the water level was around my ankles.

It was at this point that I made my log entry, took a screenshot on my phone of my position and track, switched on the electric bilge pumps, one in the sump of the saloon, the other in the heads compartment and then withdrew into the cockpit to man the manual bilge pump. I also put the gearbox into neutral but left the engine running. I think I already knew the inevitable consequences, but was determined to delay it until sun up, when I thought there would be an easier rescue or possibly even the chance to get into the water to locate the hole.

After another hour or so of pumping, it became clear that I was making little impact. At this point I prepared to abandon ship. The (new) inflatable was already inflated on the foredeck, and this was launched and secured to a stern cleat. I then launched the life raft, which is stored on a timber frame on top of the coach roof. This successfully deployed. Returning for the final time inside the saloon, I made a Mayday call on the VHF, but received no reply. Gathering my grab bag, my rucksack, a large holdall and the EPIRB and two bottles of water from inside, I put my grab bag into my rucksack, removed the flares from the cockpit locker and put them, the EPIRB, the water and a stare pair of clothes into the holdall. I returned to pumping.

I was never afraid that I wouldn’t be rescued, the equipment I had was all working and the conditions were benign. Approx. 30 mins later, with the foredeck under water, I abandoned ship. I entered the life raft, drew in the line and unfastened the raft and the inflatable from the starboard cleat and pushed away from the hull.

I’d put my phone into a Tupperware container for protection, I removed it and took a final photo of the ship. The final stage of the sinking was surprisingly rapid. The stern rose up and in a flurry of bubble and escaping air she went down.

Unfortunately, I did not cut the line at the life raft end and the excess cord must have somehow got tangled on the boarding ladder or the rudder, because a as the hull disappeared, the life raft was dragged down with her. I fell forward into the sea, dropping my phone. My lifejacket inflated. By the time I’d come to my senses, thank God, the line had released. I scrambled into the life raft, which was, of course, full of water.

I retrieved the EPIRB which after its dunking, had activated automatically. Despite this, I pressed the manual activation button anyway.

After approx. 2 hours in the raft I spotted a ship on the horizon heading my way. When I was certain it was within range I fired a rocket flare. After a short while I lit a hand held flare and then another as the ship got closer. The captain sounded the fog horn to indicate I’d been seen.

The ship came to a stop about a hundred yards away and I made heavy fork of rowing the raft to the ladder that had been lowered down the hull. The climb up the sheer side of the ship was grueling, but eventually I stood on the deck of MSC Sheila, safe.

In my opinion: Never go to sea without the right gear. If you can practice firing a rocket flare somewhere safe, before you have to fire it from a life raft! Use the bloody knife provided in the life raft to cut the painter line, that’s what it’s there for!

I would just like to say a big thank you to:

· Captain Bogdanovic and the Ukrainian crew of my rescue ship MSC Sheila. For being there.

· The staff of the Hellenic Coast Guard in Rhodes, Greece. For their understanding.

· Manolis Ligkonakos from the Savoy hotel in Rhodes. For his help in returning me home.

· Staff of ACR Electronics, Fort Lauderdale, Florida, USA. (EPIRB) For being generous, flexible and, like Seago, making fantastic things that really work when you need them!

While kite fishing off the Florida Keys, Five friends are instantly put into a life threatening situation when their boat begins to rapidly take on water.