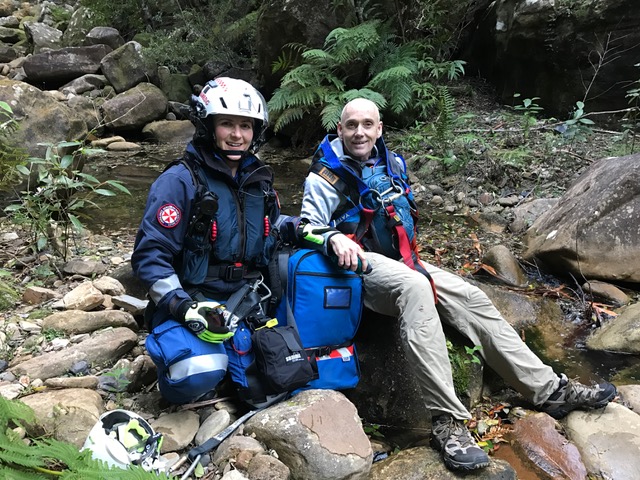 On a beautiful Spring Sunday my partner Adrienne and I set out from Govetts Leap in the Blue Mountains west of Sydney, Australia for a day of bushwalking. Apart from some strong winds the weather forecast was excellent. Our route took us down 600 metres into the rugged valley carved out by Govetts Brook and Govett Creek. We descended steeply, mostly on the true right side of Govetts Brook to Junction Rock where we stopped for lunch. Intermittently, we passed other parties who were out for the day or exiting after a night in Blue Gum forest.

As we began our return up true left of Govett Creek we met a couple who told us there was an injured solo walker ahead of us. They were planning on raising the alarm when they got out of the valley some three hours later by which time there would be little daylight left. Sure enough, shortly afterwards, we found Eric sitting down on the track. He told us he had fallen and belted his right leg just below the knee on a rock. He said he could not bear any weight on his right leg at all. We were to learn later he had badly broken the top of his tibia. Eric was a very experienced bushwalker and had done the walk to Junction Rock many times. Where he fell was an innocuous stretch of track that was relatively flat. He did not, however, have any means of alerting the rescue services of his predicament. There was no mobile reception in the valley.

Fortunately, we had an ACR ResQLink+ personal locator beacon and suspecting he had broken his leg we needed to alert the rescue services immediately. A quick survey of the area indicated that the only clear view to the sky from beneath the forest canopy was in Govett Creek. So we activated the beacon there. We were to learn from Police Search and Rescue that a satellite crossed the area approximately every seven minutes and it would take at least two contacts with the satellite for the rescue services to get an accurate idea of where in the valley we were.

The beacon worked. The Australian Maritime Service Authority contacted my emergency contacts and about thirty minutes after the beacon had been activated Katoomba Police were informed and their rescue plans began. Adrienne kept Eric company and comfortable, while I waited in the creek for signs of a rescue helicopter. After waiting for a tad over two hours with the wind picking up we began to suspect the rescue may need to be on foot. Then we heard the unmistakable beat of an approaching helicopter. Adrienne and I scrambled into the creek bed and waved lights and what brightly coloured clothing we had to attract the helicopter’s attention to our exact location. On their second pass we were reasonably sure they had spotted us.

We knew there was no place they could land. The real question was could they safely lower a paramedic given the wind, height of the canopy and narrowness of the creek. Slowly, but surely, the helicopter descended. While it was out of the worst of the wind I could see that the helicopter pilot and crew had their work cut out for them to reach us. The down force of the helicopter was something to behold. Eventually, paramedic Libby began her descent from the winch. She swung in and out of the trees a few times before reaching the creek bed. By this time the helicopter was low on fuel and needed to go to its base to refuel, leaving Libby with Adrienne and I to help Eric.

Libby informed us that there was a rescue party on foot on its way down, just in case rescue by the helicopter needed to be aborted due to the wind and inaccessibility of the terrain. It would take the party on foot at least another hour to reach us. The prospect of carrying Eric out, up a steep Blue Mountains escarpment, by hand, rather than by helicopter, was not a pleasant one. We propped up Eric with his arms across our shoulders and he swung and hopped on his good leg to the creek with us acting as his crutches. Eric seemed quite robust, that is until we reached the creek and I suspect the full force of the pain and shock of his injury hit him. He nearly passed out; the poor fellow was a bit faint and disorientated. We shuffled Eric into a harness and readied him for the return of the helicopter. With our work done and daylight running low, Adrienne and I left Libby with Eric to make our way to the rescue party who were approaching us on foot.

About half an hour later we met two paramedics (Steve and Rob) and one Police Rescue officer from Katoomba (Chris). We waited with them for the return of the helicopter and to hear Eric was safely on board. When that was confirmed the Search and Rescue team escorted Adrienne and I to the exit of the walk at Evans Lookout where it was a very cold and windy late afternoon. Chris provided us with a much appreciated lift back to our car at Govetts Leap. Search and Rescue were very grateful that we had the beacon. They repeatedly mentioned that without the beacon Eric’s situation would have been much worse.

Eric was flown to a hospital close to where he lived. He let us know the extent of his injury, thanked us for all our help, and assured us that in future he would always carry a Personal Locator Beacon.

No matter how experienced you are, if you are going to an out of the way place and be out of range to contact people by phone or two way radio always carry a personal locator beacon.

Thank you to the ACR team for their ResQLink+product. It helped avoid a very difficult and uncomfortable time for our injured friend.