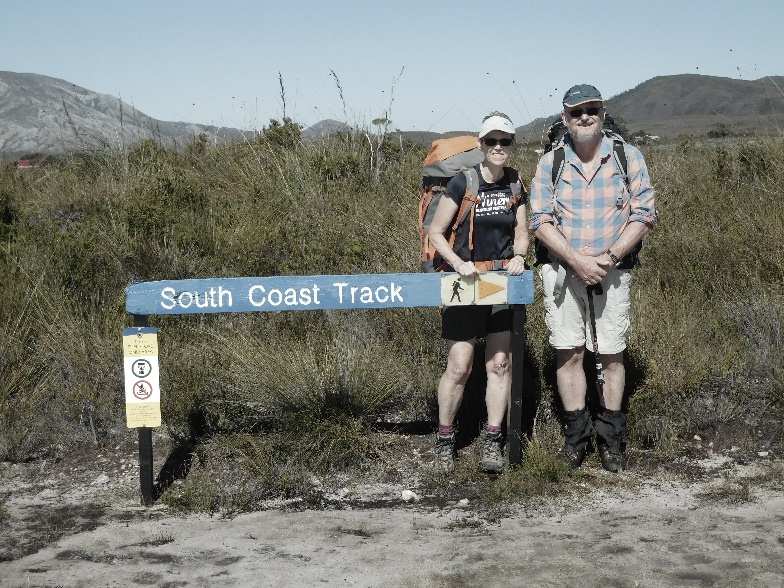 I bought a PLB-375 ResQLink+ PLB in 2012 to replace an older EPIRB. The reason I chose the ResQLink+ was that it was one of the lightest PLBs on the market coming in at 130g and that it could be used in an emergency with one hand. The unit lives in my pack and is always carried, even on short day walks.

The South Coast Track in southwest Tasmania is a remote, 85-kilometre track that traverses the wilderness of the Southwest National Park. Most experienced parties take 7 to 8 days to traverse the route, which was originally cut in the late 1800s to allow shipwrecked survivors to reach civilisation from that remote area. It is regarded by experienced multi-day hikers as a hard route. It crosses several ranges including the 1000 m (3000 ft) high Ironbound Range and is notorious for being exposed to extreme weather conditions and features extensive boggy plains, mud, fallen trees and flooded creeks in addition to its pristine beaches, spectacular scenery and leeches. As it is a wilderness area, no fires are allowed, so everything including tents, camp stove and fuel as well as food needs to be carried. There are no facilities except some pit toilets at some popular camp sites. It was my third time to walk the track and my wife, Fay’s second.

Fay and I flew in to the remote airstrip at Melaleuca to start the walk on a Sunday in late March 2021. Day 1 was a walk over fairly flat country to the coast where we camped at Point Eric. Day 2 saw us tackle the Red Hills, wade through a couple of major creeks/rivers and traverse a boggy button grass plain which is now crossed by a board walk – one of the few improvements since the route was established. Day 3 saw us tackle the steep Ironbound Range with its steep descent involving a very slippery and muddy “track” with numerous logs and fallen trees to negotiate before arriving at Little Deadmans Bay after 9 1/2 hours walking. Day 4 included a beach walk along Piron Beach and a boat crossing of New River Lagoon with torrential rain later that night.

We woke up on Day 5 and started walking to Surprise Bay, our next campsite. After an hour or two walking along the undulating crest of a heavily vegetated sand dune we reached a flooded button grass plain. Crossing this was time consuming, wading through flooded creeks and deep boggy patches. On reaching the other side we stopped for an early lunch. But after that I had no energy for even the smallest hill and struggled. Finally, we reached the beach at Surprise Bay but our way to the campsite was blocked by a raging torrent. After trying to cross the flooded creek in a couple of places we picked up water for that night and backtracked, in howling winds, to a sheltered campsite on the ridge we had just descended.

Day 6 (Friday 26 March) saw us packing up camp and heading back to the Surprise Bay beach. The wind had dropped, and the creek, although deep, was now crossable. But as I started to climb to the next ridge I struggled. We returned to the sheltered Surprise Bay camp site. Realising that I was unable to continue and that something was seriously wrong, we activated the ResQLink+ PLB, placed large orange plastic sheet at the start of the climb to the campsite (indicating which side of the creek we were on) and placed a second yellow plastic sheet where I was waiting for a response to the flashing emergency beacon.

After about 2 hours waiting, the Tasmanian Westpac Rescue helicopter hovered into view and landed close by the orange marker that we has laid out earlier. The paramedic quickly climbed up to the campsite with Fay guiding her to where I was resting. Pulling out her diagnostic equipment she realized that I had a serious cardiac event and that I needed to be quickly transported to a major hospital for treatment.

The flight along the Tasmanian coast was spectacular and we soon landed at Royal Perth Hospital where I was quickly wheeled into the cardiac part of the emergency unit for treatment. Following several hours of treatment, the Doctors had stabilised the condition and I was allowed to leave, carrying a range of medications to stabilise me until I could see the specialists back at home.

Always carry a PLB. It can save your life.

Thank you for making such lightweight and effective survival gear.