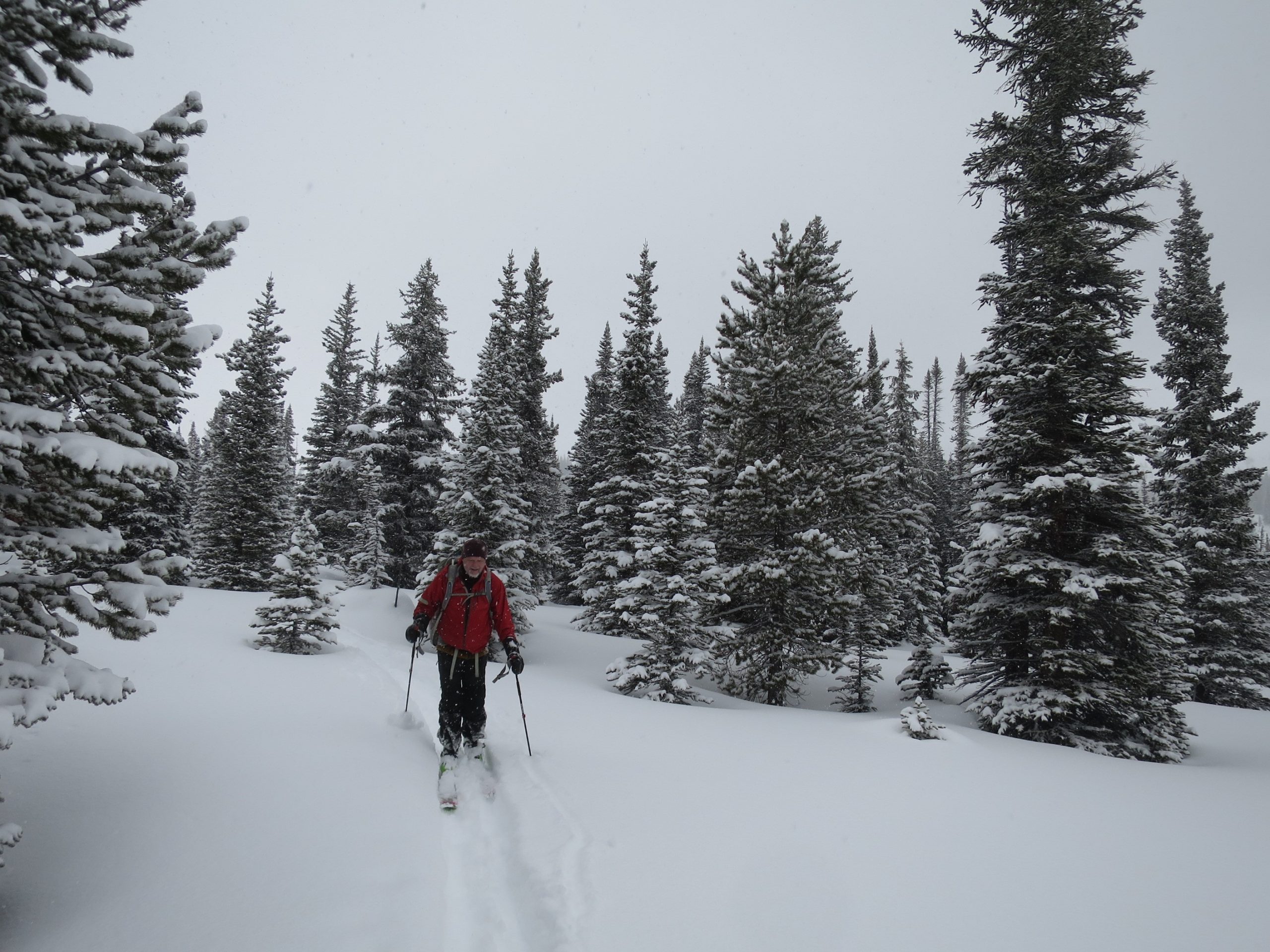 My friend Brett and I set out to ski Banff’s Dolomite Circuit on March 14.  We managed to complete the circuit, but the last couple of km were by helicopter, not skis.  And it took a little longer than expected due to an unplanned overnight on the mountain.  It’s a long story…

I checked the weather and light snow was expected in the area.  The initial ascent was pretty nice, with a little snow and some limited visibility, but still with nice views. Visibility got a lot worse after entering Dolomite Pass.  Our hopes for nice views faded as the clouds and snow closed in to create a complete whiteout.  I hoped we wouldn’t have to use the ResQLink+. The rest of the passage through Dolomite Pass and up the the bigger unnamed final pass became very slow as we cautiously plodded forward.  We had hoped to make up lost time on the ski-out, but the snow was very deep and the slope too gradual to maintain enough speed to float.  So we were a little behind but not alarmingly so.

We were late in the day reaching the final leg of the journey through forest to reach the exit to the road.  We were making reasonable progress when I reached out my left mitt to push a branch out of my way.  Somehow my arm didn’t make a proper dismount from the branch and I felt my shoulder pop out of joint. Immediately I knew that I was in trouble. I called out to Brett who was leading the way as he did for the entire trip.  I was on my knees with one ski off and my right mitt supporting my left arm.  Yes it hurt, hurt, hurt, a lot.  The pain was bad but bearable when I supported the arm and didn’t move.  Any movement would provoke a disabling spasm that left me gasping.

Brett was a hero that night.  He got out my ACR ResQLink+ and activated it for a rescue.  He helped me get my ski off and dug out a place for me to sit where I could hold my bad arm, got me into all my extra clothes, wrapped me in the reflective space blanket, and started a fire to keep me warm.  With all of our clothes and the fire, we felt that we could wait out the night without worry of frostbite or hypothermia.

Sometime close to 1 am, we heard voices and saw distant lights shining our way.  It was such a sweet moment to meet Parks Canada Safety Officers Ian and Aaron as they skied into our little encampment with their huge backpacks full of rescue gear.  They made sure we were warm, covering me with even more warm clothes and a heated blanket, setting up a tent complete with sleeping bag and air mattress.  And a gigantic bonfire.  It was huge and it kept us all warm until dawn.

At first light, a helicopter came to hoist us out of the forest.  Brett got a great view as he was airlifted first.  I got no view on the way out because they wrapped me up like a sausage roll in a thick plastic tarp with straps and buckles and attachments for hoisting.  A brief ride brought me to the road where an ambulance was waiting with an IV and plenty of fentanyl.  It was blessed relief when the doctors at the Banff hospital yanked my shoulder back into place. I was very glad to have the ResQLink+ at my disposal.

Light snow in the forecast can translate into whiteouts in the alpine.  I will be more cautious about touring in those conditions.  Brett was unhurt when he skied off the cornice, but it could have been more serious.

Parks Canada Safety Officers are supermen.  I marvel at their skill, strength and preparation.  Thanks to Safety Officers Aaron Beardmore and Ian Jackson for leaving their warm beds to spend the night in the cold snowy forest taking care of me.

I’m grateful to Brett.  I was helpless and he really took care of me when I needed it.

And thanks ACR for making a tough PLB that works when you are in trouble.