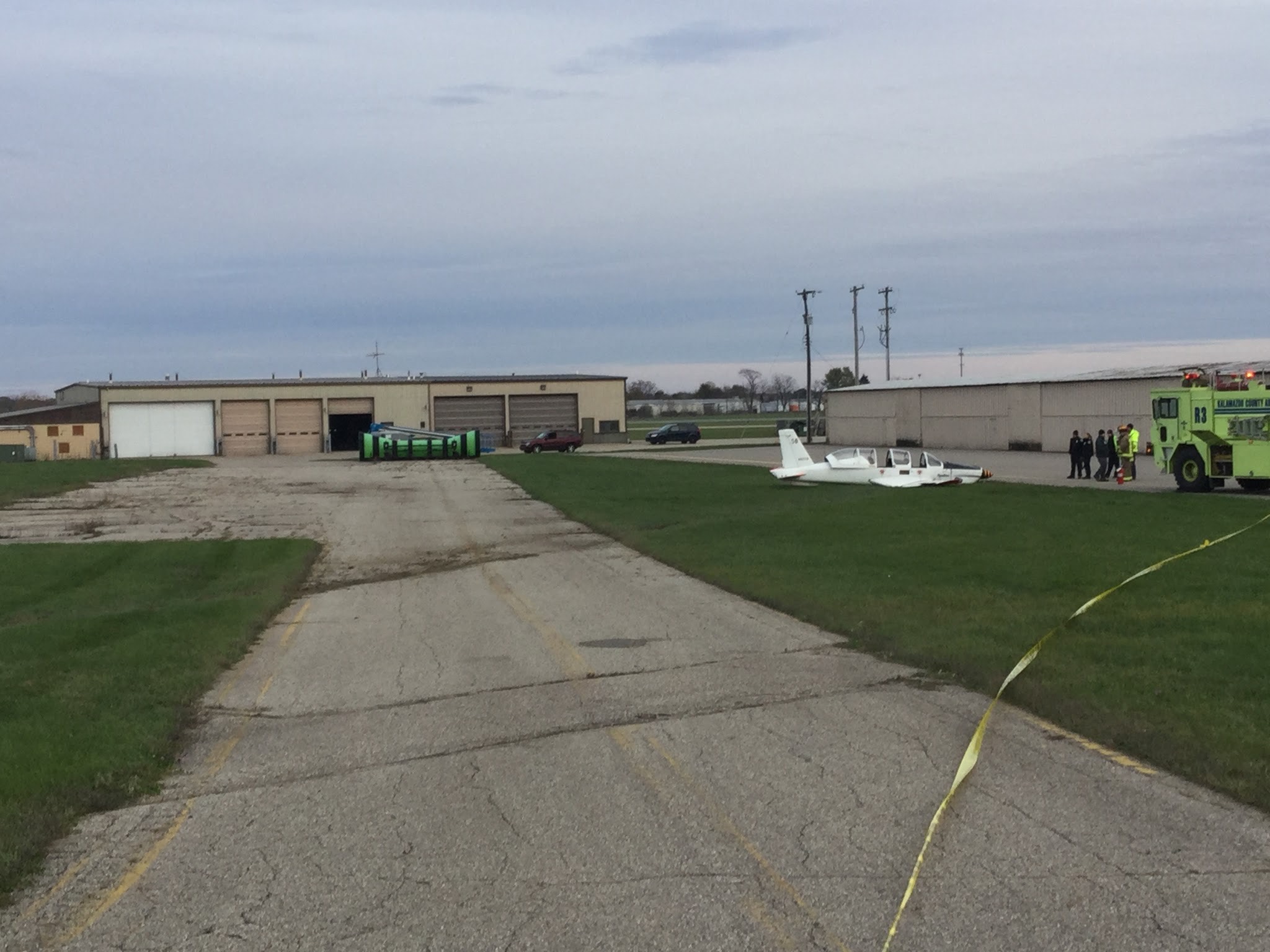 The weather in MI was mild, the sun was out, and the temperature was in the mid sixties with winds from 230 at 18 gusting to 26. I had taken off from Battle Creek, MI and flown to Kalamazoo International airport, just 15 nm to the southwest, to get fuel. My plan was to fuel up and then continue to the south for training and to get some hours before the weather got cold and cloudy. The flight to KAZO was uneventful, the airplane was flying well and the engine was running very smoothly. Once on the ground, I taxied to the self-serve fuel pumps, filled both wing tanks with full fuel, and did a walk around check of the aircraft to ensure that there were no issues from my short flight.

I started the aircraft up and taxied for takeoff to runway 23, checked the engine, and was cleared for take off. On the runway, I powered up the aircraft, and all was looking good and running well. It was a very short takeoff roll as the winds were quite strong. I retracted the gear, then the flaps, then turned the boost pump and landing lights off, and began to accelerate and climb, planning to turn to the south once clear of the airport. At approximately 300-400 feet, the aircraft had a noticeable deceleration and the engine RPM rolled back to about 1500 RPM. It was still running but not making power. The constant speed propeller changed pitch and was now a speed brake slowing me down. Straight ahead there was not enough runway or overrun left to set it back down.

There were power lines and a four-lane road with a bowling alley on the other side just to the right. To my right was a large building and the airport terminal further to the right. To the left were hangars and trees. I looked over my left shoulder and could see the off-duty runway 09 and its taxiway. It was about 130 degrees (in reality it was 140 degrees of turn) and I thought that with the winds I might be able to make the taxiway or even the runway and if not I would have an open space to land.

I declared an emergency with the tower and was asked the nature of the emergency to which I replied “loss of power”. I think he asked my intentions but I do not recall if I answered his question. About two thirds of the way through the turn to 090 I realized that I did not have the altitude to continue the turn and to make it to the runway or the taxiway. I rolled wings level, elected to keep the gear retracted, and planned to land on the grass between the runway and the taxiway. Because I was very close to the max lift of the very high-loaded wing, my attempt to flair was of limited use. I was able to get the nose up and “land” in a very flat attitude but the rate of descent which had developed due to the lack of thrust and steep turn was, in the end, too much to arrest, and the aircraft contacted the ground on its belly well over 9 G’s.

It came to rest in the grass on the other side of the taxiway about 60 feet away from a hangar. I opened the canopy and got out of the aircraft, walked around it for a moment before laying down on the wing. There was no fire even though the left wing had an intrusion and had opened the fuel tank. The aircraft looked like it was mostly intact, but you could see that there was significant damage to the wings and to the engine and prop.

As I lay there, the emergency crews arrived and asked if I was okay and looked the aircraft over. The firemen asked me to allow the paramedics to check me out and was later taken to the hospital where it was discovered that I had two compression fractures in my spine.

Before going to the ambulance, I had noticed that the ELT was going off and I told the firefighter that they might want to turn it off so that it would not continue to transmit. I am not sure if they did or not, but I do know that my home base airport was contacted because the ELT went off. Although I was in contact with ATC and they knew where I was, it was nice to know that the system worked and was transmitting as soon as the aircraft impacted.

Although I was in contact with ATC and they knew where I was, it was nice to know that the system worked and was transmitting as soon as the aircraft impacted.

Thanks so very much for all your help.

Go to product details
Take to the skies with confidence with the ELT 345. When an emergency happens, rely on the same brand that leading commercial aircraft manufacturers trust for first-class quality, superior technology, and outstanding customer service.  The best selling ARTEX ELT 345 is built to the industry’s most stringent quality management standards to ensure the ELT works the first time, every time.  The ARTEX ELT 345 transmits on 406 MHz and 121.5 MHz frequencies while providing positon accuracy thanks to the built-in GPS navigational interface. The ELT 345 boasts an industry low price for an ELT providing the same quality and performance on which the ARTEX brand was built.   Click here for information on the Canadian ELT Mandate