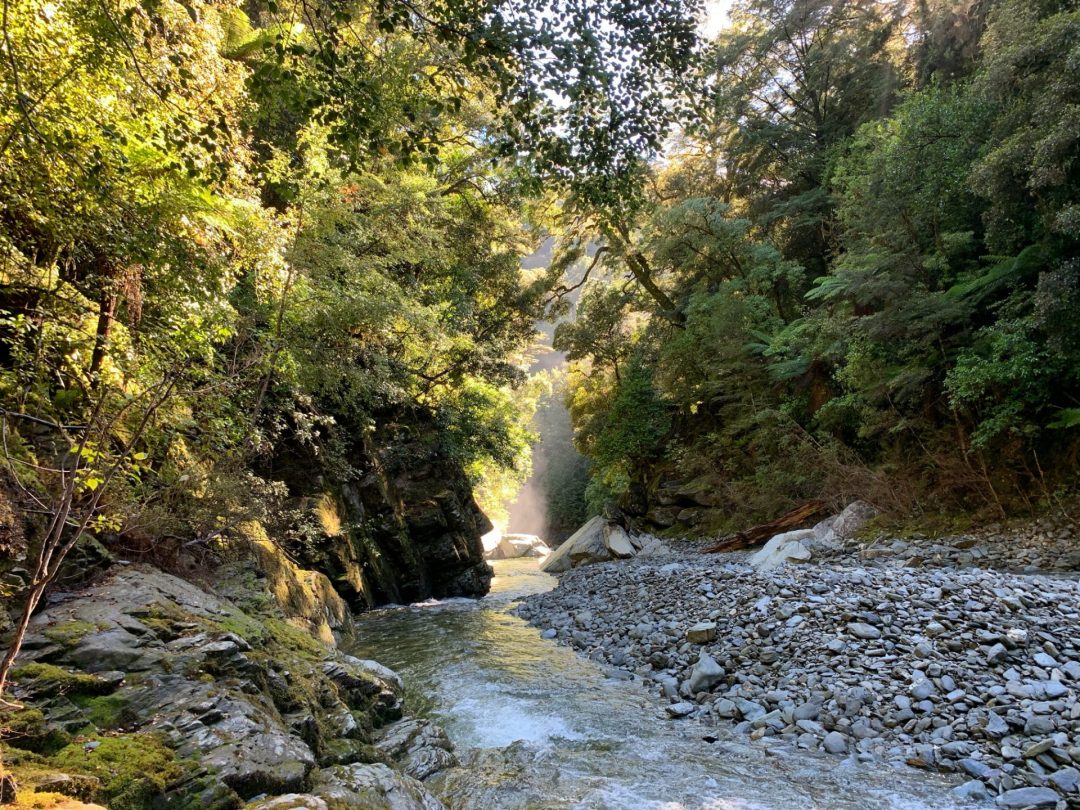 This mis-adventure started off as a nice, easy over-nighter to Devils Creek Hut in the Richmond Forest, with just a 2 hour hike in. On arriving to the hut, we saw a sign to Mt. Royal, a 3 hour hike. So we thought that would be a good day hike for the following day.

The next day we crossed the river and walked uphill for about 3 1/2 hours but felt we still weren’t really near the peak.  On the way up the markers disappeared when we got to a ridge but there was a quite definite path, this was the first point where we should have turned back. After that section, there was just a hill of ferns with no real path to see, this was the second point where we absolutely should have turned back. I got my phone out to look at the time and saw I had signal, but not much battery, we quickly tried find out about the route. We struggled to find more about the route from the side we were approaching, but knew then it should be a shingle peak, of which the only one in the area was facing us from the other side of the valley, and that we were in the absolute wrong place.

Down we went, debating if we should be further left or right but not really knowing and we just wanted to get down to the water.  After a pretty difficult and steep down hill walk through ferns we got to water, it was flowing the wrong way to the river we crossed to get to the track.  We walked along the river bed for about 3 hours, there was a lot of sliding, climbing and swimming to do this – at a couple of points Tim went fully underwater as he was trying to save our hiking bag.  We had thought we might try and stay out the night but once the bag was soaked we decided that was a bad plan with wet clothes.

We reached a big waterfall and decided it was too dangerous to continue, we had to go back to a clearing and set off the beacon.  Within half an hour of setting the beacon off we had the Nelson Marlborough helicopter rescue team overhead and were winched out, the most unbelievable service and incredible people.

After the event we thought we should have tried harder to get out, but the alternative could have been trying to stay the night, not being able, and setting off the beacon in the middle of the night in a potentially inaccessible area. We figured this would have resulted in a much more difficult, risky search and rescue, with the worst case scenario being a very real possibility if we’d tried the waterfall, slipped and fell.  It’s one thing to have a beacon, an item we only purchased 4 days prior to this event after years of hiking. But it’s another to know to use it before a situation becomes the worse case scenario.

Check and re-check your route before leaving, save this on your device, and make sure it is charged so it can be checked again!

After many years of hiking without a beacon, we decided it was finally time to invest in one. We both now think it’s one of the best investments we made.  Incredible product that really does save lives.