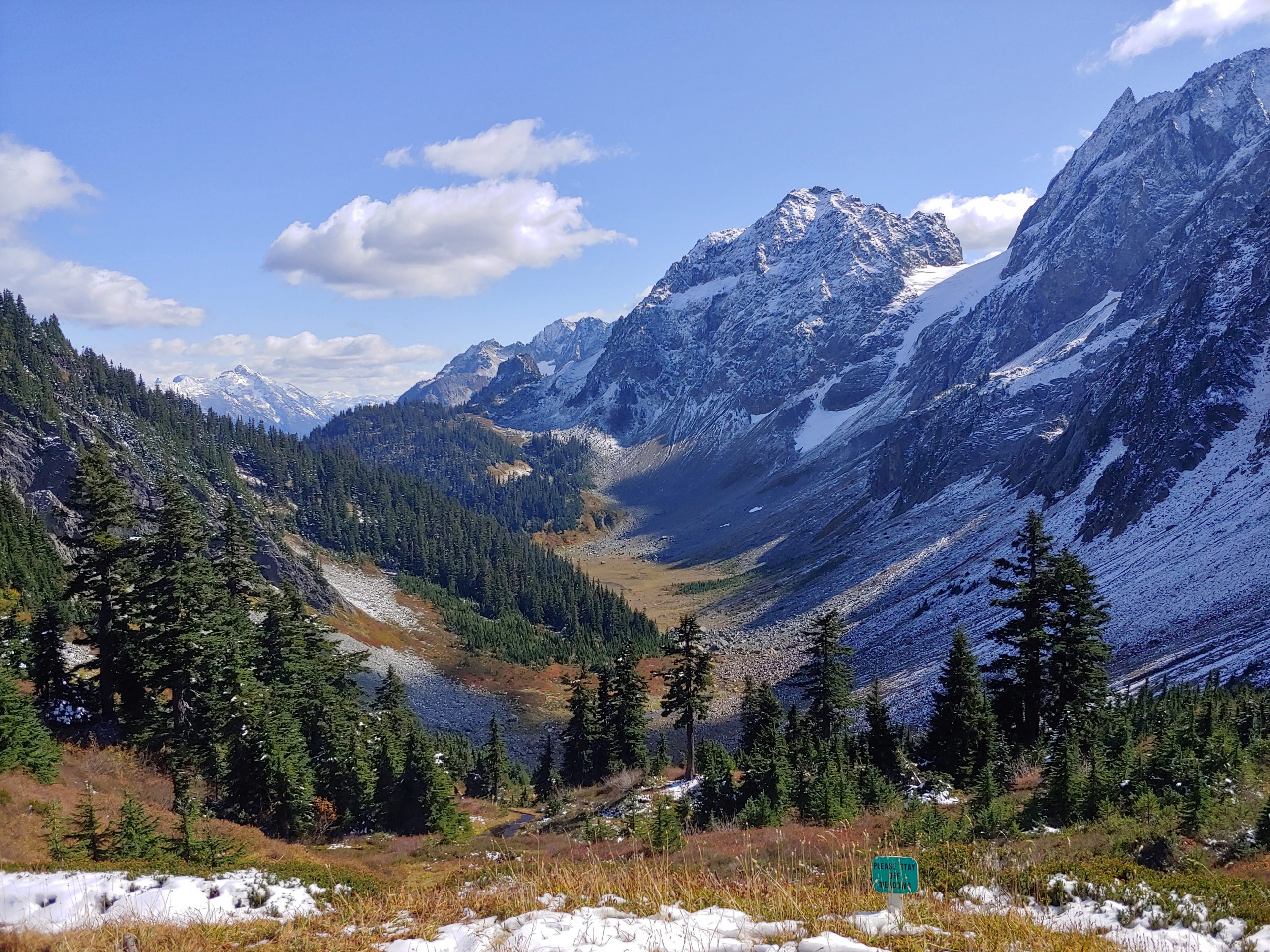 At roughly 4:00pm we were hiking back to the Cascade Pass trailhead and saw four hikers sitting on the side of the trail, two of which we recognized from earlier in the day. The two we recognized were Donna and Matt from Atlanta, Georgia, vacationing in Washington. The two others were Marie and Cheryl, local hikers, who had stopped to assist Donna. Marie had some previous experience in first aid and mountain rescue and took the lead in this situation.

Donna slipped on a muddy patch of trail, just west of Cascade Pass, about a quarter mile below the saddle on the way back to the trailhead (about 3.5 miles from the trailhead). She said she heard something crack when she slipped but believed it was just a bad sprain. She was in pain and did not think she could make it the rest of the way down the trail. Those of us who were there to help (five people in total) were considering options to carry her out, but were not confident that it would be safe due to mud and ice on the trail.

The location where the injury occurred was in a wide open clearing, and the rest of the trail down would have been switchbacking down in thick tree coverage. We knew sunset was in about three hours and temperatures were below freezing with wind-chill. Everyone on scene had limited supplies meant only for a short dayhike. With lack of overnight gear or food, dropping temperatures, nightfall nearing, and the inability to carry the injured hiker out, we unanimously agreed that the situation could soon become life-threatening.

(Note: we considered the option of sending two “runners” out to call 911. The 3.5 mile hike out, plus 23 miles of rough forest road would have taken at least 2.5 hours before we would reach cell signal. It would have been getting dark before we could even make the initial call.)

Knowing we were in the best possible location for a helicopter evacuation, we stayed put and activated our ACR ResQ Link at 4:10pm. At that point, everyone involved began exchanging contact information, making the scene as comfortable as possible, and making a plan for when the helicopter arrived, assuming the extraction would happen very quickly. About five other hikers passed by the scene while we were waiting and we asked if any of them had a two-way communication beacon, but no one did. We eventually asked a hiker on his way down to call 911 upon reaching cell signal to confirm that a mountain rescue had been initiated.

After two hours of waiting for the helicopter and watching the sun begin to set, Austin and I (beacon owners and strong hikers) decided we would hike and drive out as fast as we could to make the 911 call (we weren’t sure if the beacon was working at this point as we didn’t expect it to take so long for SAR to arrive via helicopter). After about an hour of hiking we heard a helicopter arrive around 7:45pm and fly close before flying away. We didn’t see or hear it land near the rescue sight, so we couldn’t be 100% sure it was the extraction we were waiting for. We reached cell signal in Marblemount around 8:40pm and listened to voicemails from a North Cascades National Park ranger, Air Force Rescue Coordination Center, and our parents. We called the NOCA ranger first and then the Air Force to confirm and explain the situation and learned that Donna had been successfully extracted and transported to a local hospital. We then called our parents and apologized for scaring them.

The next day I contacted Donna and learned that she had broken her tibia when she fell and might need to have a plate put in to let it heal properly. As of writing this report, we are still waiting to hear from whoever hiked the beacon out, so we can make a plan to retrieve it from them. We left it in place when we hiked out so the signal would not change locations when the helicopter got close, and we gave everyone involved our contact information.

Sidenote: just before sunset, a hiker with photography gear came by to take sunset photos in the area where we were waiting. He had planned to camp higher up but changed his mind due to how cold it was getting. He set up his tent, sleeping pads and sleeping bag for Donna and her husband and gave them his overnight food and bear canister in the event they had to stay the night (we had all been seeing bears all day on the trail and there was even one eating berries on a hillside above us the whole time we were waiting for the helicopter!). He planned to sleep in his car at the trailhead and retrieve his gear the next day. Given the circumstances, the injured hiker was made as comfortable as she could have been considering she broke a bone, surrounded by bears in winter-like conditions while on vacation.

Always be prepared to spend the night out.  Pack plenty of layers in case of emergency!  Even with a beacon it may take hours for help to arrive.

Thank you for building a life saving product!