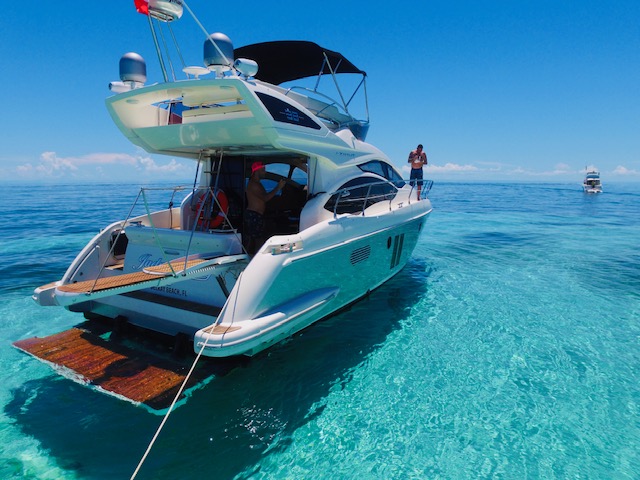 I was in a 38-foot Azimut. We were 7 miles South of Bimini. We lost our Port engine shaft and directional control. The vessel was in danger of sinking. The shaft slipped out of the transmission and was lodged up against the rudder. If the propeller moved past the rudder the boat would sink in minutes. I briefed my 3 PAX. Two adults and my 9-year-old daughter. I advised on the use of PFD’s, the raft and a plan of action. I then began to issue a Mayday. No luck on channel 16, no signal on the cell phones. It was an emergency, so I activated the Aqua Link View. I advised the PAX what I was doing and began reviewing the abandon ship POA. Within 15 minutes, I received a message that came through on my cell phone from the USCG Miami. But I could not make any calls out. They began contacting boaters and Boat US via CH 16. We started getting radio calls. Then a cell call. We were assisted by a USCG Aux member that was near our location. We were later advised that because of our 406 beacon, they began to call the emergency list.

This piece of equipment is a necessity.

This piece of equipment is a necessity.

Thank you for this device.

Go to product details
This Product Has Been Discontinued.   **NOT FOR SALE IN U.S.A.   Head offshore with the confidence of the handheld AquaLink™ View Personal Locator Beacon (PLB). Its digital display provides all the important information about the beacon's functions, including GPS positioning and transmission bursts. Plus, its buoyant design means that if the AquaLink View accidentally falls overboard, it'll float. Have peace of mind knowing that if a boat emergency should occur, this personal emergency beacon will quickly relay your position to satellite networks, and reduce search and rescue time.