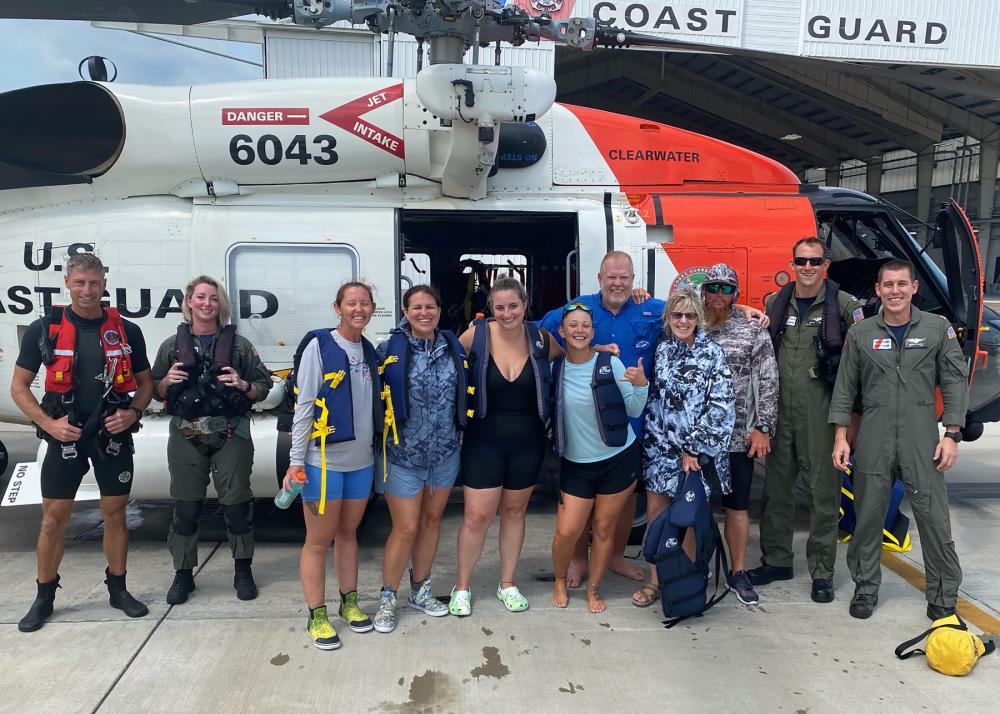 Fort Lauderdale, FL 10 August 2022– Seven people, have been rescued from a 39-foot fishing boat in the Gulf of Mexico, after being caught in the worst of two lightning storms. A US Coast Guard response, that has been highly commended by the survivors, helped locate the disabled boat and distressed passengers once captain Glenn Rumer activated his ACR GlobalFix Emergency Position-Indicating Radio Beacon (EPIRB).

Glenn Rumer is sharing his story to highlight the importance of having an EPIRB onboard to ensure the safety of all passengers is at the forefront of every voyage.

Moments prior to the lightning strike, Rumer had warned local fishing charter captain, Joshua Guy, to remove his hands from a metal cup holder he was holding – a warning that almost certainly saved his life. Guy, who was on board with his 25-week pregnant partner, was knocked momentarily unconscious as the bolt of lightning struck the outriggers and traveled through to the transom motor.

“It was terrifying. I immediately noticed Josh had fallen to his knees and that we were dead in the water.” Recalls Rumer. “I instantly went into survival mode and called my sister Sherrie to get the EPIRB,” it was then that Rumer activated the ACR EPIRB, sending their GPS location via satellite signals to emergency services globally.

Rumer, who has 35-years boating experience, has offered his boat to the Old Salt Foundation every year for the past three years, facilitating an annual all-women’s fishing tournament. He acquired the safety device eight years prior to needing it on this potentially fateful day, initially purchasing it to allow him to fish further offshore, with confidence.

An EPIRB is a distress beacon used in the maritime environment to effectively take the ‘search’ out of ‘search and rescue.’ Once the device is activated, the EPIRB sends a unique SOS distress signal and GPS coordinates to the worldwide emergency satellite network. From here, the type of beacon can be identified, along with the owner’s details, vessel information, and emergency contacts.

Upon activation, Rumer instructed all passengers to head below deck with their life jackets to protect them from the lightning storm, while he searched for signs of power. He checked the VHF radio and the breaker panel, but all to no avail before joining his fellow passengers below deck.

At this point, the boat was located over 100 miles off the coast of Clearwater and was being thrown around by six feet waves in torrential rain and relentless lightning. Approximately two hours after making the distress call, the US Coast Guard arrived by helicopter.

Following their rescue, the survivors were shown the image that the US Coast Guard received when the EPIRB initiated the distress call. The boat had been in a purple zone, in the pinnacle of two storms and surrounded by seventy-six strikes of lightning. Despite being referred to as the ‘sunshine state’ Florida recorded more deaths from lightning strikes in 2021 than any other state.

Rumer brands the ordeal a traumatizing event and is urging anyone taking to the water to invest in this life-saving equipment – safety should not be left to chance.

“The EPIRB saved our lives,” said Rumer. “There are so many people who lose their lives on the water because they are not prepared with the necessary equipment. EPIRB’s must be made a requirement on all boats. We wouldn’t be here without it.”

All survivors who activate their ACR EPIRB in a rescue receive a free replacement EPIRB for sharing their story through the award-winning ACR SurvivorClub initiative. Glenn Rumer is now a member of the ACR SurvivorClub, his story can be read here.