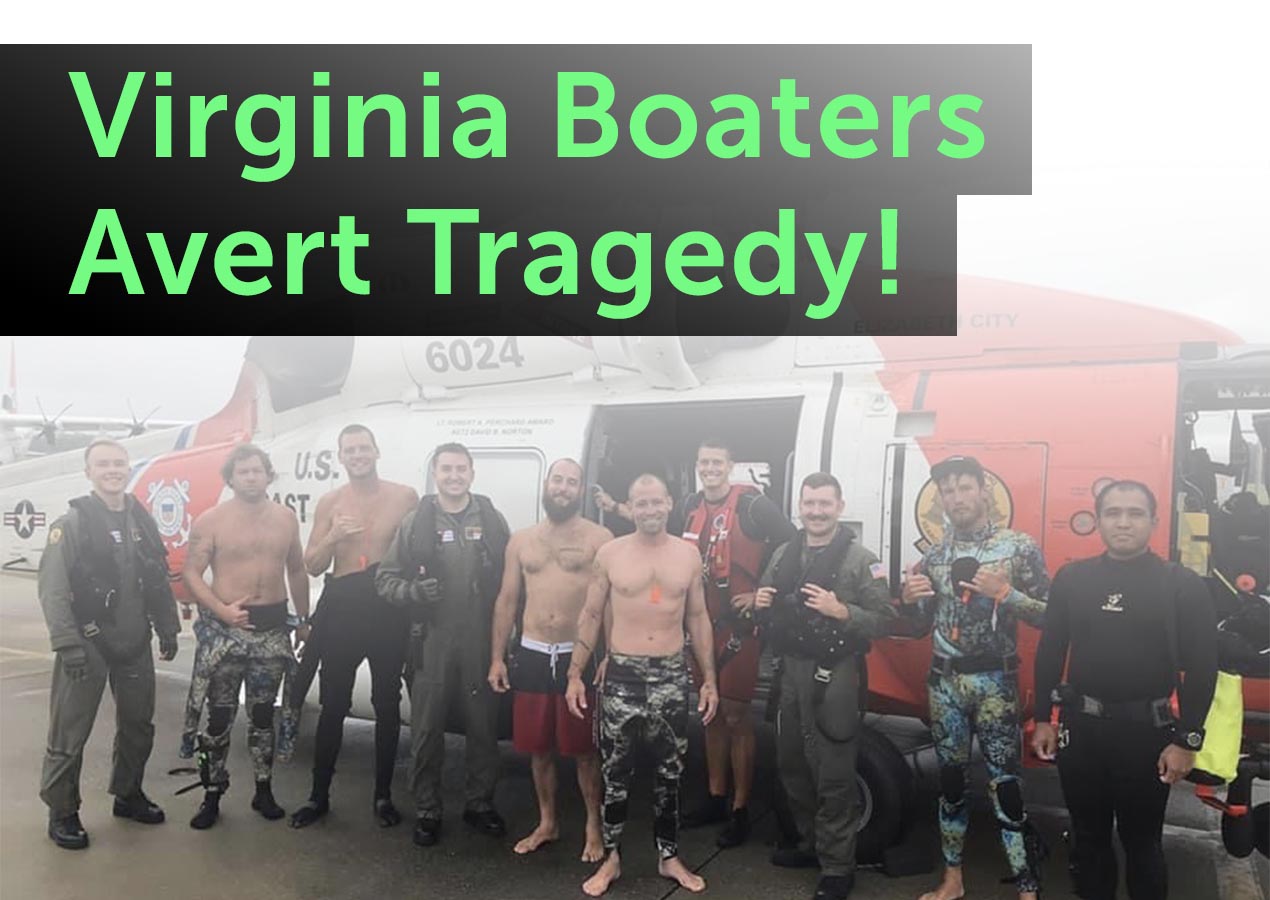 In June this year, looking forward to a summer of boating and spearfishing with friends, Ekkaphol ‘Tan’ Boriboune decided to spend a couple of hundred dollars on a tiny Personal Locator Beacon (PLB) to enhance onboard safety. Just a few weeks later, the ACR Electronics ResQLink 400 beacon averted a tragic end to a day on the water, proving its worth beyond doubt when a simple press of a button on the device saved the lives of himself and five fellow fishermen when their vessel capsized during heavy weather 13 miles offshore from Virginia Beach.

Boat owner Kyle McKenzie and five friends, including Tan, had set off in the 24-ft Wellcraft on a late-summer Sunday on August 16th heading for the Chesapeake light tower, off the coast of Cape Henry, to spear some fish. However, a good day soon turned into a nightmare when the winds started to send in larger swells while the group were spearfishing, causing water intrusion via the transom. The bilge pump struggled to keep the water out and, with the boat becoming increasingly low in the water, the engine failed to start after multiple attempts.

Securing their life jackets as the boat capsized, the six mariners quickly found themselves stranded in the water, with four of the group left clinging to the hull and two managing to swim to the Chesapeake Light Tower. Among his friends with the boat, Tan thankfully was able to activate his PLB, initiating the vital link to the Coast Guard that would ensure rescue personnel could locate their position quickly and accurately.

Back at the Fifth District Command Center, the alert had been received and a call was then made to secondary contact Brouk who was able to confirm that the beacon owner went fishing with a group and also help with information about their possible location and the type of vessel. A MH-60 Jayhawk aircrew was diverted from Air Station Elizabeth City, who were conducting a training mission nearby, while Sector Virginia launched a boat crew from Station Little Creek. The helicopter rescue crew quickly arrived on-scene shortly and, about two hours after the boat had capsized, all six men were hoisted individually into the helicopter and taken to safety, with no injuries reported.

At home in Norfolk, Virginia, Tan and his wife, Brouk, have vivid memories and perspectives of the desperate situation that spiralled so quickly out of control to leave the six mariners stranded and fighting for their lives. With first-hand experience of a dramatic rescue at sea and the anguish of those left waiting for news ashore, the couple consider the ACR PLB to be essential – the ‘best money we ever spent’. They are urging other boaters to make sure they invest in the best 406 MHz beacon equipment to ensure they can alert rescue services as quickly as possible if the unexpected should happen.

Tan said: “Wherever you are, you need a way to communicate with rescuers when emergency arises, especially when you are outside the range of traditional communication such as cell phones or VHF. We didn’t have much time before the boat went down, but I had just managed to grab my mesh bag with the beacon. When I pressed the activation button, I knew it was flashing and sending out the distress signal. ACR is a brand that a lot of people use and trust, so I had high confidence that help was coming.”

Brouk added: "It was a terrible feeling when the Coast Guard called, but I also had feelings of relief knowing that Tan was prepared. The ACR ResQLink beacon saved my husband’s and five other lives. It bought them a second chance of life. Now everyone in the local community is going to buy one for themselves. From the bottom of my heart, thank you.

"From the Coast Guard video, we have a screenshot of a guy [crew member Nick Brown] jumping out of the basket to hug my husband. He was trapped on the light tower frantically trying to signal for help, watching the boat with his friends capsize and float entirely out of sight. He probably thought they were dead. No idea they had been rescued. That moment of the video touches my heart."

In the official USCG bulletin report, James Cifers, civilian watchstander at the Fifth District Command Center, said: “The owner of the PLB had just purchased his device in June and was the only one on board who had one. This case could have turned out quite different if the owner had not bought and registered his device. We recommend all mariners maintain updated registration and keep these devices on them while underway so we are able to find them quickly and accurately when they need us the most.”

Safety and survival specialist ACR Electronics’ next generation ResQLink PLBs incorporate first-hand feedback from survivors who have activated the beacons in real-life emergencies. Compact, lightweight and easy to carry, the ResQLink beacons feature a protected activation button located away from the test button, multiple wearable mounting options including a belt clip and oral inflation clip for easy access in an emergency, and an easier-to-release antenna enclosure. ResQLink PLBs utilize three integrated signal technologies – GPS positioning (Galileo and GPS GNSS), a powerful 406 MHz signal, and 121.5 MHz homing capability – to quickly and accurately relay the user’s position to a worldwide network of search and rescue satellites at the push of a button.

All survivors who activate their ACR beacon in a rescue receive a free replacement beacon for sharing their story through the ground-breaking ACR SurvivorClub initiative.

Tan added: “I want to thank ACR for making a product that is simple to use, and, most of all, works as designed when we needed it most.”

Tan and Brouk tell their story of the rescue and reflect on lessons learned in a new video released by ACR Electronics.