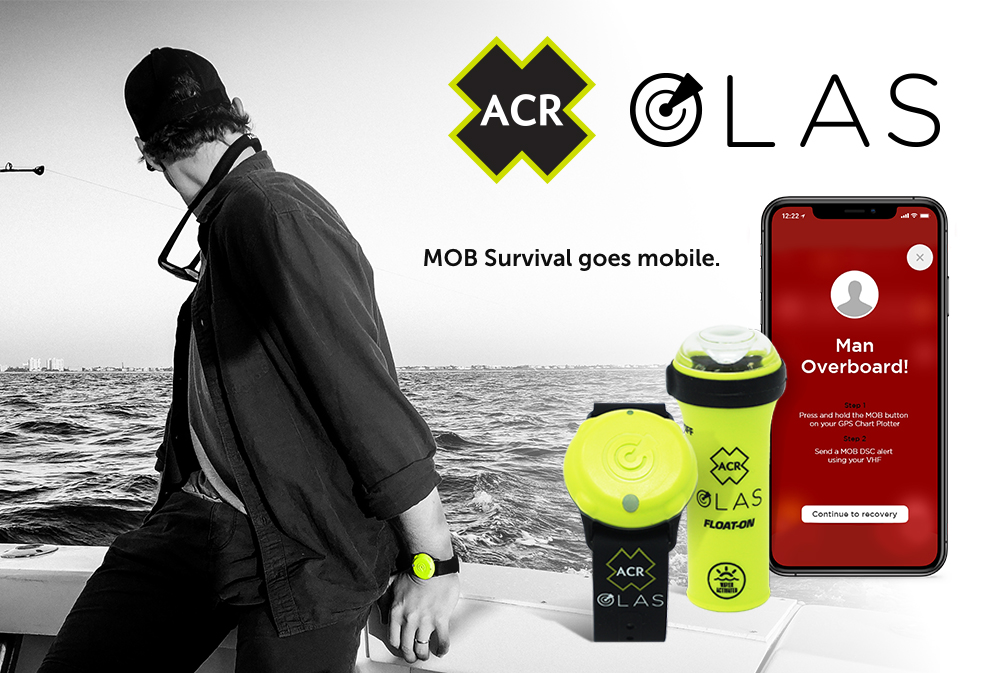 The addition of the low-cost ACR OLAS platform to its portfolio ensures that ACR Electronics is the only company to provide a comprehensive range of man overboard (MOB) technology to customers. By providing MOB systems to suit the budget and needs of all boaters and vessel size, ACR Electronics ensures vital technology is now available from one source to increase the safety of more sail and motorboat owners, their families, pets and crew while out on the water.

Offering unique flexibility when selecting MOB system features, the ACR OLAS range introduces new products to the market that uniquely allow boaters to scale up their man overboard systems as required in the future, depending on crew numbers, cruising plans and safety requirements.

The ACR OLAS product line includes the ACR OLAS Tag and ACR OLAS Float-On MOB systems, worn by the user to connect with the ACR OLAS app on their smart phone or tablet. ACR OLAS mobile application technology works by detecting a break in the ‘virtual tether’ from the mobile device to the ACR OLAS MOB system within 8 seconds of someone falling overboard. The phone stores the GPS location, sounds a loud alarm, alerting crew to the man overboard incident before the OLAS app then aids the recovery with directions to the stored GPS location.

Introducing the latest 5.0 Bluetooth technology to the market for the first time, the ACR platform also features the ACR OLAS Core Base Station and ACR OLAS Guardian, a wireless engine kill switch, for boaters who require extended functionality. The ACR OLAS Extender is a further option that can be added to increase the range of the OLAS MOB systems on larger boats.

Mikele D’Arcangelo, Vice President of Global Marketing and Product Management for ACR Electronics, said: “With the launch of the new ACR OLAS platform, we are pleased to introduce affordable man overboard technology to more sail and motorboat owners. ACR OLAS technology provides added reassurance and peace of mind, particularly for boaters on smaller vessels up to 40 feet who previously may not have invested in any man overboard system. The majority of people own a mobile device, which means safety afloat can be affordable for everyone with the availability of the ACR OLAS platform. The really significant aspect of our new OLAS systems is that our customers also have the ability to extend their OLAS functionality by adding on the ACR OLAS Core Base Station and kill switch to their existing ACR OLAS platform. ACR OLAS is a truly scalable solution that, when added to our existing MOB range, is a unique offering to the market.”

OLAS technology provides an affordable man overboard alarm system for cruisers and boaters and is available through the ACR OLAS Tag and ACR OLAS Float-On, both of which pair with your device and connect to the free iOS and Android ACR OLAS app. Compact and versatile for attachment on your wrist or lifejacket, the Tag’s universal silicone strap can be used by crew, children and animals and is ideal for day time cruising or short-handed daytime sailing for constant reassurance onboard. The OLAS Float-On is a water-activated USB rechargeable torch, which is easy to attach to a life jacket and ideal for boaters sailing during the day and into the night.

Once the ‘virtual tether’ between your OLAS system and device is broken, the OLAS mobile app will emit an alarm and light signal, record the time and GPS location of the incident, illustrate the direction and course to return to the alert GPS location and advise on VHF Mayday Call using pre-set vessel information. Up to 6 Tags or Float-Ons can be connected to one phone or tablet and one OLAS device can be connected to multiple phones or tablets.

The new OLAS Core base station and OLAS Guardian wireless engine kill switch negate the need for phones or tablets, linking up to 15 OLAS Tags or OLAS Float-On MOBs to the boat and featuring app connectivity, plus a built-in alarm and emergency light. An option of adding an OLAS Extender is also available to extend the range to over 100 feet. Enabling more freedom of movement than a traditional kill-switch lanyard, the OLAS kill switch provides added peace of mind, particularly for solo boaters. It is easy to install and allows the user to restart the engine for the rescue after 5 seconds.